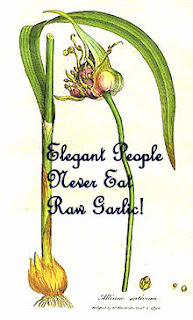 Anti-Garlic Chefs, Elegant People after My Own Heart
Truly elegant and considerate people DO NOT EAT RAW GARLIC, nor do they sabotage their friends by inserting it into their cuisine. I thought this was common knowledge, proper etiquette and behaviour comme il faut among civilised cooks and those who entertain in elegant fashion. But, I have seen a new website that claims to be "elegant gourmet" while dishing out recipes that contain as many as "six cloves of raw garlic." Heaven help the unwitting "gourmands" who end up reeking in the office or home for as long as a week after ingesting those poisonous concoctions.
In England, household staff are required to never ingest raw garlic or onions, in order to not offend those who live in or visit the home. Butlers especially are fired for such breaches in common, traditional etiquette. Why, then, is the culinary world bent on sabotaging our very lives with raw garlic in the most unlikely of dishes? Certainly, raw garlic is used by some classes of people in many European countries. Provence, for instance, where we have an 11th-century ruin, has among a certain faction of its population many adherents to the raw-garlic lifestyle. They keep to themselves, though, and don't really mix with the elegant stratum of society. Tourists are bidden to partake of the stuff in some traditional Provençale peasant cuisine, however, and they announce their presence by bearing that tell-tale aroma.
There is an increasing awareness, among chefs and those who employ them, of the trouble caused by the "stinking flower".  An anti-garlic movement has been in existence for a at least four years.  Notables such as actress Monica Bellucci have been outspoken in the cause. Here is a Sicilian chef/restaurant-owner whose anti-garlic stance has made the news:
Filippo La Mantia
©M-J de Mesterton
at March 29, 2011