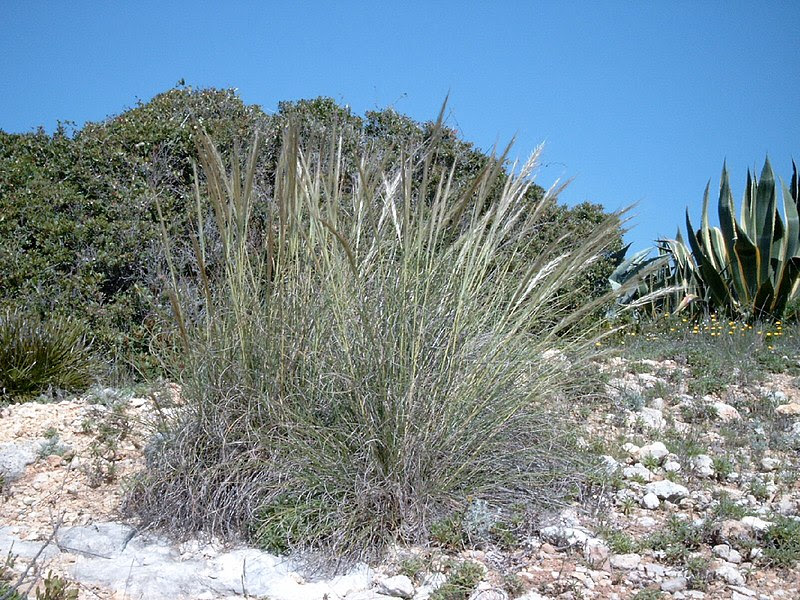 Photo of Esparto in Portugal by Carsten Niehaus
Esparto and Its Uses
Esparto, also known as "halfah (or alfa) grass" or "needle grass," macrochloa tenacissima and stipa tenacissima, is a bunching grass that grows in northwest Africa, Portugal, and most notably in Spain.
Esparto has a very durable consistency, thus it has traditionally been used for making rope, cords, baskets, espadrilles, and even women's undergarments.
Esparto is also used for fibre-production in making paper. The fibres of esparto contribute to a high-quality paper often used in book manufacturing. First used in Great Britain in 1850, it has been extensively used there and in Europe, but is rarely used in the United States because of the high cost of transporting it. Esparto combined with five-to-ten percent wood pulp for paper-making.
The "Spanish" grade of esparto is usually regarded as the higher-quality, while  "Tripoli" esparto from northern Africa is considered  lesser in quality. The fibres are fairly short in relation to their width, yet do not create any significant amount of dust. Because of the short fibre length, the tensile strength of the paper made with esparto is less than that of many other papers, but its resistance to shrinkage and stretching is superior, thus it is an attractive, dense paper with excellent inking qualities. Paper made with esparto also folds very well.
Lygeum spartum, another species of grass, is often woven together with true esparto, and is incorrectly  labelled with the colloquialism "esparto grass," but  is also known as "albardine."
The Villa de Daimiel, an ancient municipality in Ciudad Reál (Royal City) of La Mancha, an area also known for its viniculture, has produced esparto for  many kinds of crafts, textiles and garments since the middle ages.
~~M-J de M.
at January 28, 2011